The couple last month shared pictures of their seaside function on Instagram.

Adhila Nasarin and Fathima Noora, a gay couple who were reunited by the Kerala High Court in May after being separated by their parents, recently exchanged rings.

The couple last month shared pictures of their seaside function on Instagram with the caption “Achievement unlocked: Together Forever”.

Dressed in wedding attire, with traditional jewellery, and exchanging garlands, the couple shared photos on Instagram. Ms Nasarin captioned a picture, “I follow the rules I make,” with users congratulating them. 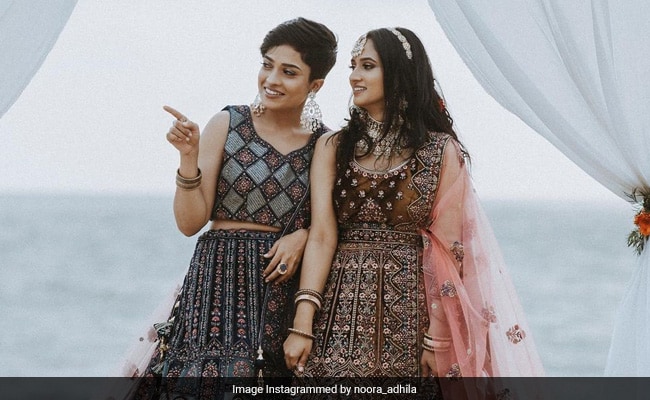 In another picture, Ms Nasarin and Ms Noora are seen holding a cake in the Pride Flag colour. Ms Nasarin told BBC, “We just tried the photoshoot because we thought the idea was interesting,” adding, “We’re not married yet, but at some point, we’d like to be.”

The couple met in Saudi Arabia when they were students and later decided to live together but faced a tough test after their family objected to their relationship.

Ms Nasarin in her petition said she reached Kerala’s Kozhikode in May and met Ms Noora, and for some days they lived in a shelter home, but the police intervened after being tracked by their relatives.

Ms Nasarin’s relatives took the couple to Aluva from Kozhikode and after a few days Ms Noora’s parents took her away by force as well.

The Kerala High Court ruled in their favour after they were forcefully separated.

The Supreme Court, in 2018, had decriminalised consensual same-sex relationships in its landmark judgments, striking down the colonial-era law.

Four years after its judgment, the Supreme Court has sought the Centre’s response in separate pleas by two gay couples seeking enforcement of their right to marry and a direction to the authorities to register their marriage under the Special Marriage Act.

The pleas seek a direction that the right to marry a person of one’s choice be extended to the LGBTQ (lesbian, gay, bisexual, and transgender, queer) people as part of their fundamental right.