China’s Djibouti base has a pier which can base aircraft carriers, submarines and warships. High-res here

China may station aircraft carriers, large warships and submarines in its first overseas military base in Djibouti, a move that would have profound security ramifications for the Indian Navy.

Details of the base feature in the US Department of Defence’s annual report on China, which is submitted to the US Congress. The report, released on Sunday, comes less than four months after NDTV published high-resolution satellite images of the base, including a large Chinese Navy landing ship at the dock. This is the backbone of China’s amphibious assault forces.

“In late March 2022, a FUCHI II class (Type 903A) supply ship Luomahu docked at the 450-metre pier for resupply; the first such reported PLA Navy port call to the Djibouti support base, indicating that the pier is now operational,” says the US Department of Defence’s 2022 China Military Power Report.

“The pier likely is able to accommodate the PLA Navy’s aircraft carriers, other large combatants, and submarines,” it adds.

This is not the first time that the United States has raised the possibility of China getting ready to deploy aircraft carriers in the Indian Ocean region. In 2017, Admiral Harry Harris Jr., who was commanding the US Pacific Command, told NDTV, “There is nothing to prevent them from sailing in the Indian Ocean today.”

Since then, China has been busy developing its aircraft carriers and now has three operational ships, each with incrementally greater capability. The Indian Navy presently operates two aircraft carriers, the made-in-Russia INS Vikramaditya and the INS Vikrant which is still several months away from being fully operational. 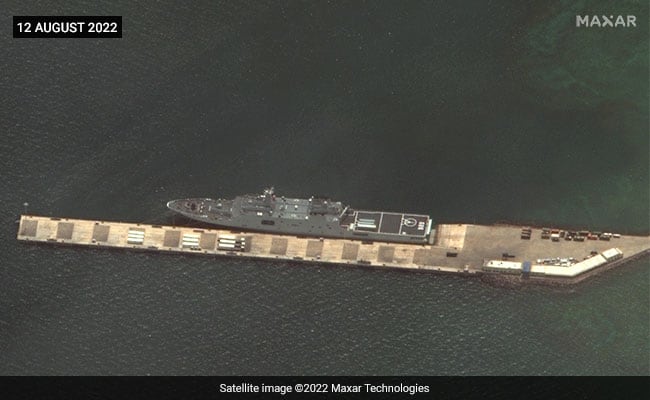 The US report says, “PLA Navy Marines are stationed at the [Djibouti] base with wheeled armoured vehicles and artillery, but are currently largely dependent on nearby commercial ports due to the lack of experience utilizing its recently operational pier on its base.”

Chinese People’s Liberation Army (PLA) forces deployed in the Djibouti base “have interfered with U.S. flights by lasing pilots and flying drones, and the PRC (People’s Republic of China) has sought to restrict Djiboutian sovereign airspace over the base”, it notes.

In other words, the US military believes Chinese forces deployed in the region have used ground-based lasers to temporarily blind or impair the vision of US fliers in the region. These have also targeted US drones.

The base in Djibouti appears to be just the start of a process of Beijing identifying and ultimately acquiring land in countries where it can expand its military presence.

“Beyond its base in Djibouti, the PRC is very likely already considering and planning for additional military logistics facilities to support naval, air, and ground forces projection,” the US report says. This includes securing a presence in the Indo-Pacific beyond the artificial islands that it has illegally constructed in the South China Sea.

“As of early 2021, dredgers were spotted off Cambodia’s Ream naval base, where the PRC is funding construction work and deeper port facilities that would be necessary for the docking of larger military ships,” says the US report. 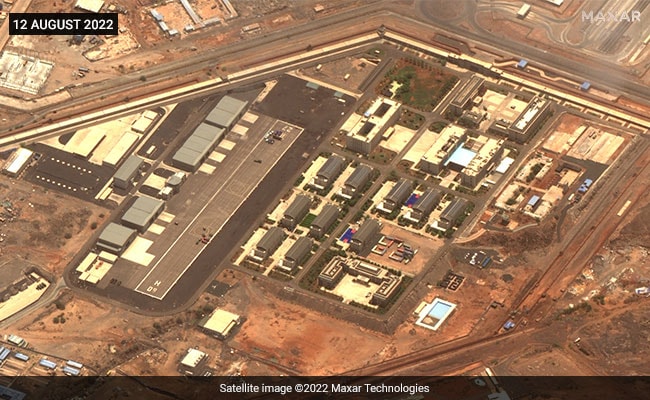 Chinese Marines at Djibouti base are equipped with wheeled armoured vehicles and artillery. High-res here

China established a standing Naval patrol off the Horn of Africa 14 years ago. While there was initial scepticism about their ability to deploy far away from their home shores, the Chinese Navy was able to demonstrate the ability to keep ships on station for six to nine months. With the base in Djibouti fully operational, China will be able to permanently position warships in the region.

“The Persian Gulf is 8,400 km and the Horn of Africa 8,800 km from the nearest Chinese naval base of Hainan; both 10-15 days sailing time,” says Admiral Arun Prakash (retired), India’s former Navy Chief.

“So, China is merely fulfilling the objectives it had set out in its Defence White Papers of 2015 and 2019, of creating ‘strategic strong points’ in locations that provide support for overseas military operations and act as a forward base for deploying military forces overseas,” he says.

Built at a cost of $590 million and under construction since 2016, China’s base in Djibouti lies by the Bab-El-Mandeb Strait, one of the most critical channels of international commerce which guards the approach to the Suez Canal.

For the Indian Navy, the operationalisation of this base raises one key query. “For India, it is a portent that a Chinese Indian Ocean Squadron is in the offing,” says Admiral Prakash. “Will it be led by an aircraft carrier?”