Rupee Gains 10 Paise To 81.22 Against A Softer Dollar Languishing Near 5-Month Lows 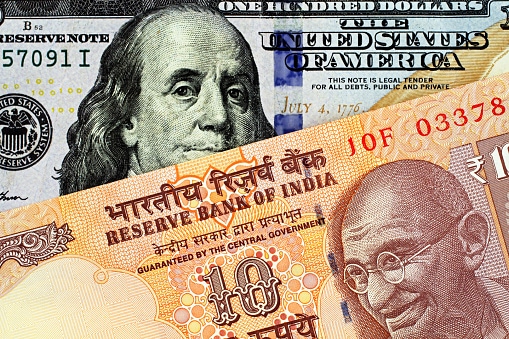 Rupee Today: Rupee gains against the dollar in early trade on Monday

The rupee gained in early trade on Monday as the dollar failed to gain any traction and languished at five-month lows after traders ignored the stronger-than-expected US jobs report, and mounting optimism about China’s reopening boosted risk sentiment.

PTI reported that the domestic currency gained 8 paise to 81.25 against the US dollar in early trade.

“In the near term, appreciating factors for the rupee could be a weakness in USD/yields, a fall in oil prices, appreciation in peer currencies like yuan/yen, FII’s inflows, and a stable domestic outlook,” said Amit Pabari, Managing Director of CR Forex Advisors.

Investors will also eye the decision of the three-day policy meeting of the Reserve Bank of India, which is scheduled to be announced on Wednesday.

According to experts surveyed by Reuters, the central bank will likely increase interest rates by a lesser 35 basis points, to 6.25 per cent, as long as inflation is still a concern. The RBI has increased rates by 50 bps each of the last three times.

After the likely opening uptick based on Asian cues, “the balance of probability” is that the rupee “will not do much”, a trader at a Mumbai-based bank told Reuters.

If the rupee struggled to move above 81 last week, despite the host of positive cues, there is little reason to think it will be different today, the trader added.

The dollar index, which compares the greenback’s value to six major currencies – including the yen and the euro – fell to its lowest level since June 28. Last week, the index declined 1.4 per cent.

“We move past US payrolls with only a momentary shake for risky markets,” Chris Weston, Head of Research at Pepperstone, told Reuters, noting that the data supported the ‘soft landing’ argument and is unlikely to change the Fed’s course, where a 50 basis point hike next week is still the firm default position.

“With limited data to drive this week and no Fed speakers, the market may start to think for itself and look at massaging exposures ahead of next week,” Weston added.

As officials sped the process of reopening the economy, Chinese stocks rose, and the yuan surged beyond the widely watched 7-per-dollar mark for the first time since September.

“There are more signs of relaxation of Covid curbs, and the positive factors have not been fully priced in by the market,” Kenny Wen, Head of Investment Strategy at KGI Asia in Hong Kong, told Bloomberg. “I expect more funds to continue to hold long positions in the remainder of the month for year-end window dressing purposes.”

Inflation Below 7%, 1st Time In 3 Months

Previous articleIf you do video calling on WhatsApp, a very useful feature is coming for you, see photo
Next articleSensex Falls Nearly 100 Points On Jump In Oil Prices, Extending Losses For Second Straight Session

If you are confused this Valentine what to give...

highlightsApart from Vitamin D, zinc deficiency is also a...
News4patna

If you are confused this Valentine what to give...